Aircraft Coatings and the Importance of Understanding Cost in Use

Aircraft Coatings and the Importance of Understanding Cost in Use 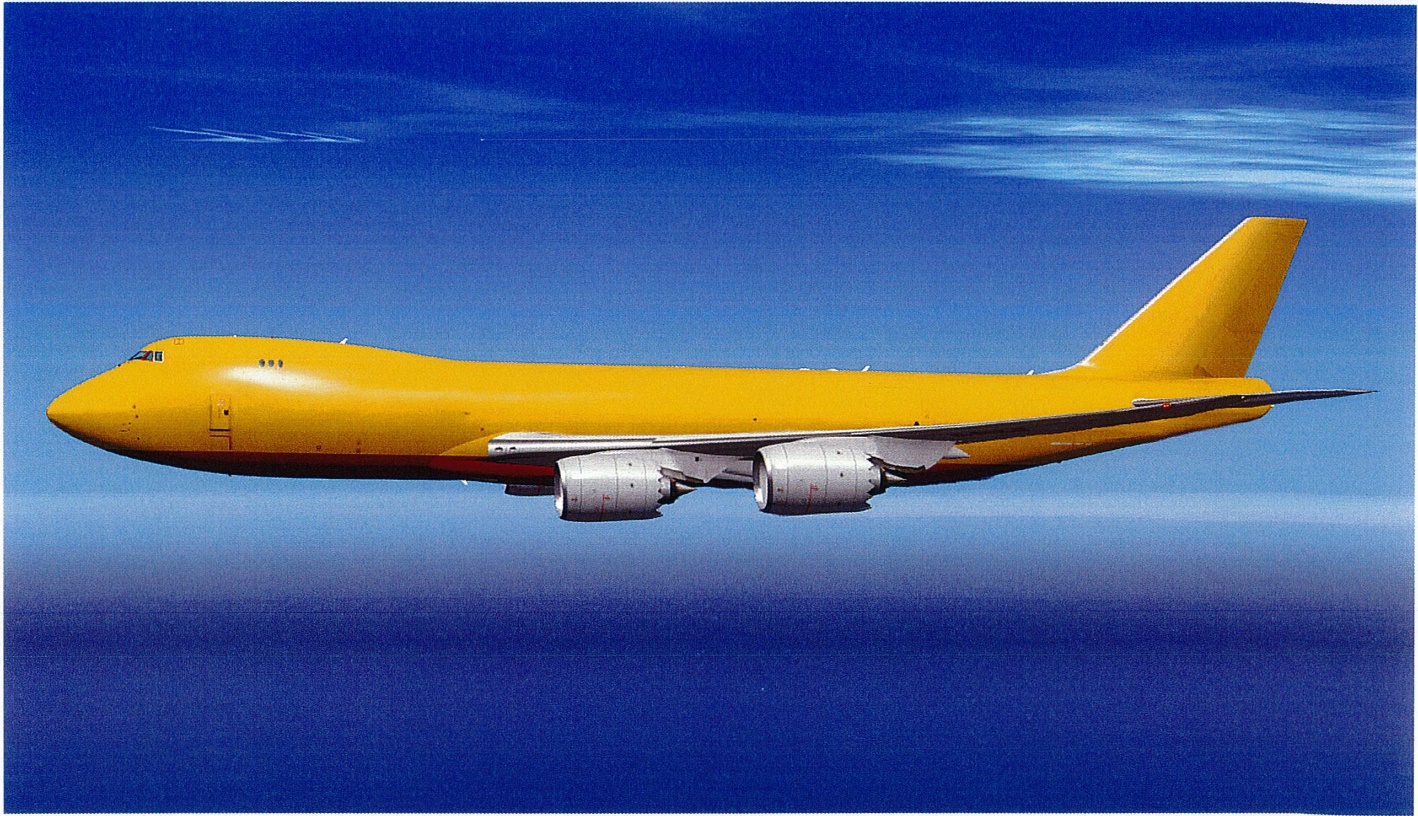 To paint an airplane in a bright yellow coating (and for all you skeptics reading this, actually they are not a rarity) is a very good example to explain the concept of cost in use. As the foregoing will explain, the choice of pigments to formulate this colour shade can have a very significant impact on cost as well as performance.
Tasked with matching those highly chromatic yellows which abound in use for brand recognition, fashionable architectural exteriors, safety warnings, automotive styling for vans, trucks, compacts and sports cars, as well as airplanes, the formulator has a problem. It is not matching the shade per say, it is the problem of being able to deliver that colour in a fully hiding one coat finish. The requirement to hide the substrate completely is not only for the aesthetics, as viewing the substrate through the coating would not be pleasing to the eye. Another important reason is that primer coatings are not resistant to UV exposure; a transparent topcoat, could lead to inter-coat adhesion failure. Of course, doubling the application time having to apply a second coat has negative financial implications as well as adding constraints to capacity for both the coatings manufacturer and the end user.

Choosing organic pigments would provide the capability to formulate highly chromatic colour shades. However, they are relatively transparent and, more often than not, cannot provide the necessary opacity for a one coat application. Inorganic pigments, on the other hand, provide very good opacity, but with a few notable exceptions are low in chroma and color intensity, making their use to formulate highly chromatic colour is rather limited.

Luckily, there is a class of pigments to help solve this problem; bismuth vanadate inorganic pigments -colour index reference Pigment Yellow 184. This pigment class has been around since the mid-eighties, which for the Pigments Industry, is quite a recent arrival to the scene. However, long enough timewise for most of us to acknowledge they are a versatile class of inorganic pigments, providing the coatings and plastic manufacturers the ability to formulate highly chromatic shades in yellow colour space.

In coatings, bismuth vanadate, unlike organic pigments provide the capability to deliver full hiding in one coat and their excellent weathering fastness allows them to be used in the most demanding applications, such as architectural coatings for exteriors, automotive coatings, aerospace and coil coatings.

DCC is the leading manufacturer of bismuth vanadate pigments and has been very busy these last 3 years bringing to the market new developments with higher strength (25%) and opacity (15%) combined with increasing chroma and redness. Exhibiting these characteristics DCC Yellow RMX is the latest innovation to be launched. These attributes extend the colour palette as well as bringing down the cost in use, and as we shall see here, most certainly extending the advantage over organic pigment only combinations.

In particular, for applications where a high degree of durability is nice to have but not essential, bismuth vanadate competes for choice with organic yellow pigments such as PY.151, PY.154 and PY.138. For many of those saturated yellow colour shades the choice of the organic pigment route will inevitably result in a struggle to achieve hiding in one coat. However, as the raw material cost per liter or KG will be significantly less than the formulation based on bismuth vanadate, it often becomes the chosen route, even though the true application cost, more often than not, is significantly greater.

The airplane coating scenario is a classic example of the importance of understanding cost in use. For the paint maker it is the cost of getting the job done and for airline, in addition, the weight of coating that needs to be applied. Alongside the weather conditions for the route, the fine tuning of weight parameters such as gross weight and fuel loads are always the hottest topics for pilots.

For the Boeing 747 used in this example; we have matched the shade of a chromatic medium yellow with three formulations; 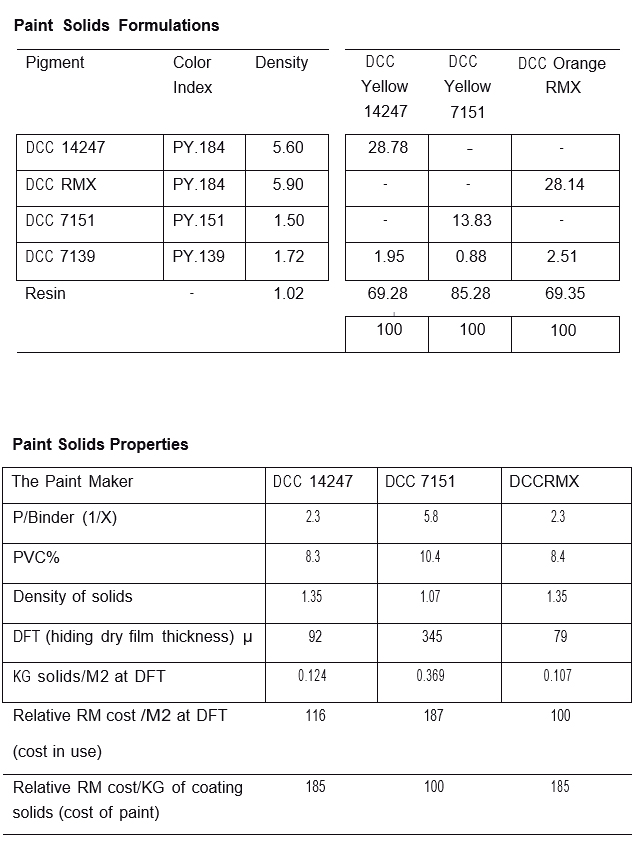 For those who are not familiar with paint formulation in detail, the important parameters to understand are:

Pigment/binder ratio- to note is that the formulations based on bismuth vanadate have a much greater concentration of pigment by weight than the organic pigment formulation, meaning that bismuth vanadate-based coating delivers more pigment, and therefore opacity, per Kg of coating (approx. 3 times the organic only formulation). The reason for this difference relates to the surface area of the pigments. Organics pigments have a small particle size and large surface area compared to bismuth vanadate pigments. Essentially, the surface area is the parameter that limits the pigment/binder ratio that can be achieved. Beyond that limit properties such as film integrity, gloss and adhesion become • adversely affected.

PVC- Similar to pigment to binder ratio but expressed in volume terms.

DFT- the dry film thickness to achieve a hiding coating. This figure times the surface area covered is the volume or weight of the coating solids that needs to be applied; in this case to the Boeing 747 fuselage and tail with an estimated area of 1713 M2

Raw Material cost/ M2- This is a good measure of the relative cost to get the job done. The assumption is that all the formulations here provide a one coat finish. If not, and there would be additional conversion costs to consider. For the airline, down time would also be another significant cost factor to apply.

It is highly unlikely that the “organic only” solution could be applied in one coat. Perhaps using additives to improve rheology, the pigment to binder ratio could be increased. However, for this particular shade such a formulation is likely to be at the edge of feasibility for film properties such as gloss and adhesion.

With close to 3 units less chroma (DC), the colour match based on DCC 1424 7 was borderline acceptable. For DCC Yellow RMX with its added chroma and redder hue, it was not a problem to match this bright shade.

An interesting comparison is between the cost of the coating per KG and the cost in use per KG (cost to achieve hiding): The raw material cost of solids of the organic only coating is 46% lower than the coating based on DCC Yellow RMX. However, from the view point of getting the job done the reverse is true; the raw material cost to full hiding is 47% less when based on DCC Yellow RMX. With such large differences between the coating’s raw material costs and actual cost in use, it is perhaps not surprising that the organic only option is often mistakenly perceived as the most expedient way forward.

The average weight of a passenger with carry-on and hold luggage is 83KG (apparently, a figure that is steadily rising due to increasing obesity). The weight saving of 449 KG for the solution based on DCC Yellow RMX compared to the organic only coating is equivalent to 5.4 passengers plus all their belongings.

Given that a long-haul return flight costs on average $1000 and the route is flown every day, this is equivalent to around $1M potential lost revenue. Taking $5/kg for air cargo freight as an average charge corresponds to C $0.8 M of lost revenue annually. Extrapolating these savings to the lifetime of the aircraft, suggests this is a subject that is very important to the airlines. Even more so, taking into account that on average an aircraft is repainted seven times.

Compared to DCC Yellow 14247, the conventional grade, the innovative DCC Yellow RMX provides a raw material weight savings of 29KG for the airline, on top of the C 15% raw material cost saving to the paint maker.

It is estimated that every KG saved corresponds to lOOL less fuel usage per annum. The example here demonstrates that the very minimum savings would be 45,000 liters of fuel. With environmental impact in mind I calculated that I would need to drive my car for 29 years to consume that amount of fuel!

From this example, the importance of understanding the true cost in the final application may seem to be a “no brainer” and from the scale of the potential savings and positive impact on revenues, a rather unique application to consider. Perhaps so, however, DCC sales of bismuth vanadate pigments are steadily increasing in recognition of their potential to extend the colour palette to include bright chromatic yellows and oranges that can be applied in a practical one coat finish. No doubt, this combined with their outstanding fastness properties is making them the preferred choice for high performance coatings. Perhaps less well understood is their potential utility in applications where weathering fastness is nice to have but not essential. Here, the advice to the formulator is that the outstanding opacity of bismuth vanadate pigments will often also make them the best choice on economic grounds.