Your June Newsletter is Now Available!

Check out this month’s issue to learn about the following:

We are pleased to announce that Donald Greenwald will move into the next chapter of his distinguished career.    Effective June 1, 2020, Donald will be named Senior Operating Advisor where he will be a strategic advisor to the CEO and executive team.   He will continue to be a member of the Executive Team and a member of the DCL Board of Directors.  Donald’s extensive knowledge of the pigment business and industry relationships will be vital as we make this transition and beyond.  Donald attended New York University, earning degrees in Economics and Philosophy. He joined the Landers Segal Color Company (LANSCO Colors) in 1980; rising to President and CEO in 1996, a position which he held for 22 years until the merger with Dominion Colour Company in 2018 to form DCL Corporation where he has since served as the Chief Revenue Officer for the combined company.

Effective June 1, 2020, Magen Buterbaugh was named the Chief Commercial Officer, succeeding Donald Greenwald.   Magen joined DCL in 2019 as Executive Vice President of Strategy, Technology & Product Management and was a member of the executive team.  Magen’s responsibilities as Chief Commercial Officer will include management of global commercial functions as well as Research & Development.

Prior to joining DCL, Magen was the President of TenEx Technologies, LLC, a start-up company focused on developing innovative, materials-based technology solutions for the oil & gas industry.  In this role, Magen built the company from the ground up and was able to successfully commercialize three new nanotechnology-based products for enhanced oil recovery in under two years.  Prior to TenEx, Magen was the Global Business Director for Fluorochemicals at the DuPont Company and then subsequently, its spinoff, Chemours.  She spent 15 years with DuPont where she held positions in engineering, operations, consulting, product management, business development, sales management and business management across several polymers and chemicals-based businesses.  Magen holds a BS in Chemical Engineering from Penn State University, where she was just named a 2020 Outstanding Engineering Alumni, and an MBA from Widener University.

Please join us in congratulating Magen and Donald on their new roles and wishing them both continued success! 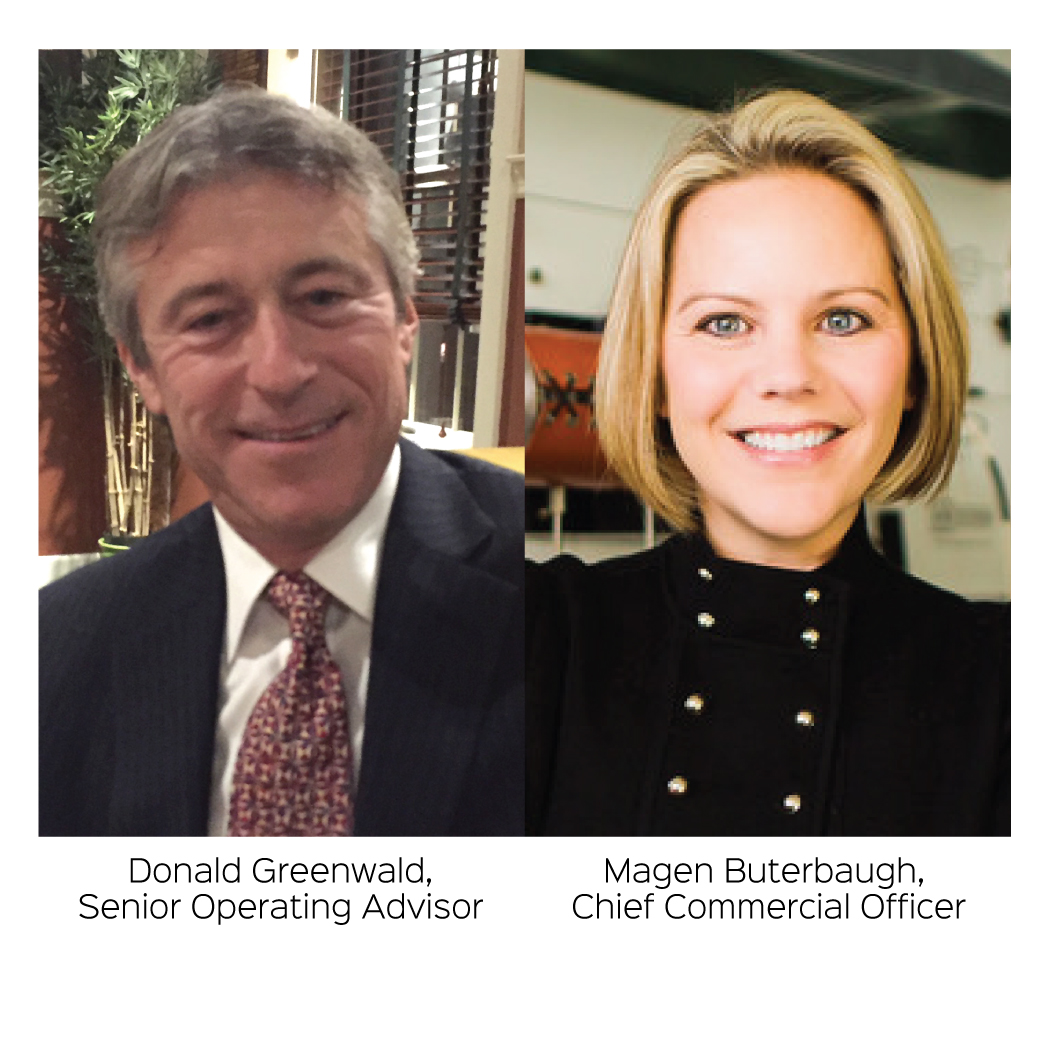 Chalking vs. Fading: Knowing the Difference

Chalking appears as a white powder on the surface of the paint. This occurs as the paint is exposed to weathering and the binder (resin) is slowly degraded by sunshine and moisture. Chalking can further result in an increase in fading and also washing-off of pigment can occur. The degradation of the binder means a loss of protection for the pigment and extenders and they can rub off the surface. Over time, most outdoor paints will show some degree of chalking. One of the main causes of chalking is the use of high amount of extenders in the paint formulation (high PVC). Other sources for chalking can be an incorrect Titanium Dioxide (Ti02) selection, resin with low UV resistance, use of precipitated or natural calcium carbonate. Chalking will mostly occur on flat paint, and low-grade coatings.

Fading, on the other hand, is the change of color. Fading is typically the result of the pigment having poor color fastness. Similar to chalking, a small amount of color change is natural over time due to exposure to sunlight. However, using high quality exterior pigments will provide improved performance and durability and reduce the color fade. 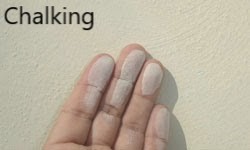 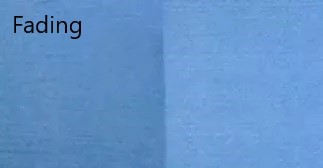 Chalking can be controlled by using extenders with lower oil absorption, using resins with better UV resistance (100% acrylic recommended), and natural calcium carbonate (avoid precipitated). Chalking can be removed from a coated surface by power washing or scrubbing the surface with a trisodium phosphate cleaning solution and rinsing with clean water. Allow the surface to dry completely. If the amount of chalking is excessive or lots of residue remains on the surface, a quality primer needs to be applied before repainting. In most cases, an acrylic primer with low PVC will be a better choice with a severally chalky surface. Fading can be avoided by using high-performance pigments (HPPs) that have superior weatherfastness, UV resistance, and high gloss. HPPs are typically more expensive than the classical pigments, however the need for outstanding durability is necessary to avoid costly customer complaints.

DCL Corporation offers a broad range of pigments that are high quality in both industrial and architectual coatings, with low fading potential and good gloss retention. Contact us if you need help with either a chalking or fading problem!

Having issues such as gelling, fading, flocculation with pigments in your formulation? We can assist you! Pigments are designed and produced to be insoluble particles used to impart color in a variety of materials. The diverse range of pigment chemistries, the end use requirements, can create a challenging situation for chemists in selecting the optimal pigment or additive for a given application.  The proper pigment or additive selection is critical in determining the performance of the finished coating, and the efficiency during the production processing. Understanding the different pigment types, properties and chemical families will help the formulator select the most effective High-performance pigment chemistry and manufacturing processing thus avoiding potential problems with the final coating and applications. 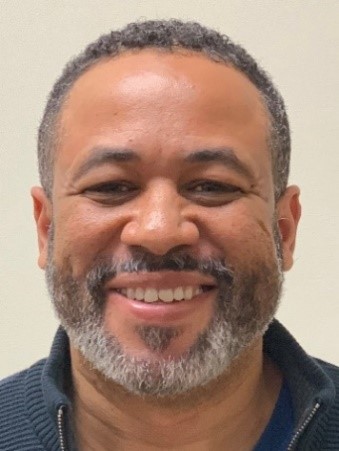 This webinar will be presented by Jadel Baptista (Technical Director, USA). Jadel has 29 years of experience leading global, cross-functional technical teams towards development of new technologies from discovery to its introduction in the market. Jadel has worked specifically in research & development of polymers, coatings and colorants, and technical service for coatings and pigments. His experience has been equally balanced in the areas of polymeric materials, industrial/architectural coatings, colorants, and pigments. His contribution to the coatings industry is evidenced by multiple publications on technical journals, presentations and one granted patent in the US and Europe. Jadel has also held a position as titular professor for nearly six years at Padre Anchieta University’s associate degree program in chemistry, teaching organic/inorganic chemistries, and coatings technology. He holds a bachelor’s degree in chemistry at PUCCAMP-Brazil and has completed graduate level coursework in Polymer Chemical Engineering.

We are creating a phase-by-phase plan to safely reopen offices as local laws permit and in accordance with CDC guidelines. As a precaution, we have ordered branded masks for each employee for when we re-open! As regions around the world begin to resume operations, our commercial team is eager to start visiting their customers! However, in the meantime, we will continue to interact via Zoom and Teams meetings, and don’t forget to tune into our webinar! We are dedicated to supporting you and your business in the best way possible throughout this challenging situation. Please feel free to contact us if you have any specific questions. Thank you for your continued business with DCL Corporation.

Please contact your regional sales representative for more information on the products advertised here and any others in our product range.

About DCL Corporation
DCL Corporation is a manufacturer and supplier of pigments for our customers in the coatings, plastics, printing ink and paper industries worldwide. Our extensive range of pigments is backed by technical expertise, our commitment to service excellence, continuous improvement, environmental, health, safety and social responsibility. Please visit www.pigments.com for more information on our product range.